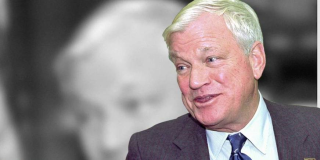 Two times in the past four years, the attorney for the late publisher Richard Mellon Scaife unduly influenced the billionaire to change his estate planning documents to disinherit his daughter Jennie Scaife and give assets to newspapers and foundations the lawyer controlled, according to a court petition Scaife’s daughter filed recently.

The Pittsburgh Post-Gazette reported, in “Daughter of Scaife files new petition challenging will,” that Jennie got nothing after her father’s 2014 death because she wasn’t included in his 2013 will or a 2010 codicil. Those changes followed a 2008 will that left her family memorabilia, according to the courts papers filed in Westmoreland County’s Orphans Court Division.

The will changes benefited the Tribune-Review newspapers, the Allegheny Foundation and the Sarah Scaife Foundation. Each of these were controlled in part by attorney H. Yale Gutnick, the petition claims.

As a result, everything from an estimated $1.4 billion to the family knickknacks went to those beneficiaries. Jennie claims that this 2010 change “was all part of a carefully orchestrated plan by Gutnick to prohibit Scaife family members from having the ability to contest Richard Mellon Scaife’s will.”

The amended petition adds allegations to those she first made a year ago and looks to strengthen her case, which was complicated by the 2010 codicil. If a judge disqualifies a will due to undue influence, the assets are distributed according to any prior, legitimate will. If there isn’t an earlier will, it goes to the children.

So, if Jennie is going to successfully recover some of the estate, she’ll have to show she was included in the last will that was free of undue influence. She says that’s the 2008 document.

Jennie argued that during her father’s battle with cancer, Gutnick persuaded him to bequeath nearly everything to the newspapers and foundations, which the attorney directed and which were his big legal clients. She also alleged that her father’s bodyguard guided his hand as he scratched his initials on the 2013 will.

“As a person in a confidential relationship with Mellon Scaife, an alcoholic who suffered from many medical issues, an addiction to medication, and weakened intellect for many years prior to his 2014 death, Gutnick received a substantial benefit under both” the 2013 will and the 2010 codicil, Jennie’s amended petition states.

Gutnick was chairman of the Tribune-Review’s board until January. He was aware that, according to the petition, the newspaper’s losses were in the tens of millions of dollars every year and were likely to increase. Because of this, Jennie said the attorney influenced the publisher to put a large part of his estate into a trust fund to support the newspaper.

Jennie’s petition also noted that the estate paid $100 million in state estate taxes, and hundreds of millions of dollars are said to be owed by the estate for federal estate tax. The petition estimates those taxes at $300 million.

Likewise, the late publisher’s son was left out of his father’s will. However, he didn’t join his sister’s case. Instead, he’s a party in a separate challenge filed by the daughter and son in another county. That case alleges that Gutnick and two other trustees improperly allowed Scaife to drain a family trust fund of $450 million, which was primarily used to support The Tribune-Review.