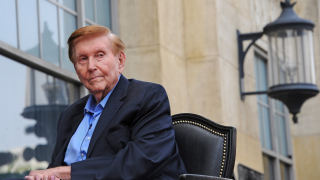 Herzer said she would appeal and immediately filed a new lawsuit against his family members. Nonetheless, the judge's decision wipes out a major concern for Redstone's executives at the struggling Viacom. Had the lawsuit succeeded and found that the 92-year-old billionaire was mentally incompetent, it could've made for a protracted corporate battle over of Viacom and CBS Corp., the other large media company controlled by the Redstone family. Instead, the case helped to resolve the rift between Redstone and his daughter, Shari. It also firmly established her as the mogul's heir apparent.

Los Angeles Superior Court Judge David J. Cowan didn't expressly rule on whether Redstone was mentally competent, but he did conclude that Redstone was in command of his faculties enough to recognize and articulate who he wanted to be in charge of his healthcare.

"In brief but compelling testimony, Redstone overcame his very significant ailments, including inability to speak clearly and what looked like much pain in swallowing" to provide the testimony, Judge Cowan wrote in his decision. "The court was able to see the strong conviction he had about what he said. He seemed very alert. He was composed and did not appear angry…. There are no legal grounds not to follow his stated wishes."

Herzer filed the petition in late November after Sumner Redstone removed her as the agent in charge of his healthcare. He also excluded her from his will.

Herzer's new lawsuit asks for $100 million from Shari Redstone, her two sons, five nurses for Redstone and his longtime chauffeur from Paramount Pictures, who also serves as house manager. Her complaint alleges that "Shari and her henchmen" orchestrated Herzer's ouster from Redstone's Beverly Park home last fall and robbed her of the $70 million that he planned to leave Herzer before he cut her out of his will in mid-October. The suit also claims "intentional interference" with an expected inheritance, breach of contract, and invasion of privacy.